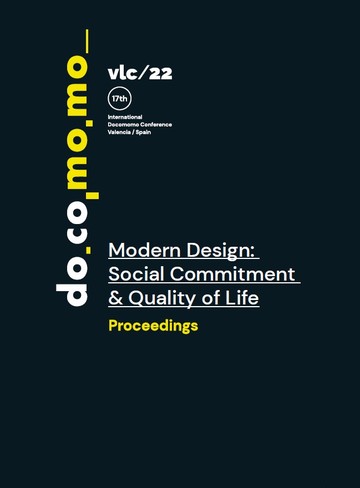 Chile is probably the Latin American country that more than others has permanently reconsidered the concept of heritage. The complex seismic situation with which the population coexist, has obliged to think over the architectural values. Moreover, because of the relevant industrial development that affected Chile at the beginning of the XX century, several urban reforms were carried out, preventing a lot of buildings from being recognized such as cultural heritage.

In this fast-moving context Italo Sasso Scampini (1895-1977) acted. Architect, born child of Italian immigrants who arrived to Chile for its convenient industrial and harbour economic situation. He started his work in a really difficult period due to the global economic crisis (1929) and to the potassium nitrate crisis which held the Latin American development back. Because of this slowdown in the economic advancement, the government encouraged significant projects in order to reduce unemployment. In this circumstance, la Fábrica de la Sociedad Nacional de Envases y Enlozados in Valparaíso was built.

This architecture, designed by Italo Sasso Scampini, was the result of technical studies about the application of concrete, reinforced floor vaults and organised system of pillars in one of the hill slopes in Valparaíso. Thanks to this project he resolved some issues about differences of levels between a three-floor and six-floor buildings, adapting perfectly to the place topography. Due to its peculiar location and constructive system, this building turned into an example of use of the concrete in architecture.

The contribution we present is the result of a research accomplished after finding the project (unpublished) in the municipal archive of Valparaíso and several on-site visits. The goal was to document this architecture and its impact on the constructive advancement of that time. After many researches, we illustrate the contribution of Latin America to the modern architectural landscape, starting from an unknown building which embrace all the essential values in order to be recognized as cultural heritage.