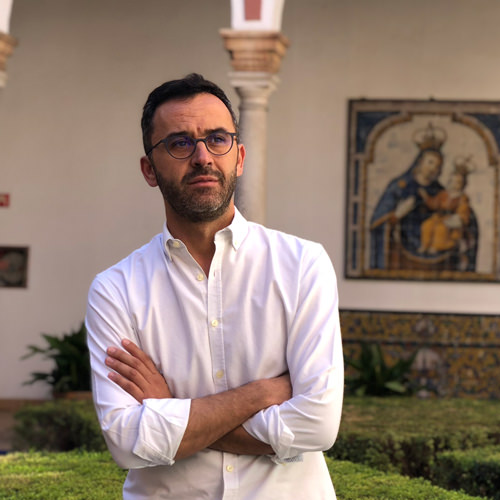 I was lucky to be born in Porcuna (the old Obvlco), a town that surrounded me with inherited architecture and taught me the importance of studying the past. From here arises my interest in the relationship between contemporary architecture and heritage, and defines the underlying theme in all my research: the Space between the ruins.

I have lived in Seville since I came to study Architecture. Thanks to a scholarship I went to Alberto Campo Baeza’s studio, where I found a teacher and where I learned the meaning of three fundamental words for an architect: PRECISION, LIGHT and REASON. With them I understood the transcendence that for an architect has to look hard for beauty.

Trying to find the genius loci that throughout the history of man has been conditioning its architecture, I arrived to Valparaíso (Chile) and, after being amazed by its beauty, decided to write my doctoral thesis there.

I understand architecture as the hard and serious work of a craftsman who continually seeks new materials and new techniques and who, knowing the past perfectly, updates it with a single purpose: to make a living space for man.

Professor and researcher in the Department of Architectural Projects. Higher Technical School of Architecture. Sevilla University.

Phd Architecture from the University of Seville with the thesis: Inhabiting the cliff: the conventillo as a promoter of a new architecture in the hills of Valparaiso, directed by doctors Alberto Campo Baeza and Luz Fernández-Valderrama Aparicio.

Fondecyt Postdoctoral Researcher at the School of Architecture and Design of the Pontifical Catholic University of Valparaíso.

Master in Architecture and Historical Heritage

Master in Urban Management of Latin American and Andalusian Heritage

Author of numerous projects in which heritage research has been combined with a new architecture. Among them, it is worth mentioning the Rehabilitation of the royal butcher shops of the 16th century, in Porcuna (Jaén): the Rehabilitation of the convent complex of San Francisco de Estepa (Seville); the restoration of the Galleries of the Pósito Real de Carlos IV de Porcuna (Jaén) or, more recently, the Intervention in the Sacristy of the Sanctuary of Nuestra Señora de Regla de Chipiona (Cádiz). His work has been published in various national and international magazines. Thus, recent articles in Wallpaper*, Casabella or Domus stand out.

Pablo Millán has developed several patents, among which the creation of Salt Filters for the conservation of archaeological remains stands out for its impact on heritage issues. He has given lectures at numerous universities and organizations, highlighting the American Institute of Architects, the Council of Rectors of Valparaiso, the College of Architects of Chile, the Sapienza in Rome or the Polytechnic University of Madrid.

His work in heritage conservation has led him to research on a larger scale: the city scale. These works have been the subject of several articles, among which the recently published in the EURE magazine, Approach to the study of the transformation processes of historic cities. Thematization or Historic Cities, a reality in tension in the New Journal of Culture and Art Policy.

COAS Award for the Restoration of Old Royal Butchers from the 16th century in Porcuna. Finalist.

“Andrés de Vandelvira” Prize for Architecture in its X Edition. Nominated in the Rehabilitation and/or Restoration Work category.

First prize in the competition for a new transport interchange in Antequera (Málaga).

First prize in the competition for the reorganization of the Plaza de San Marcos and its surroundings. Beas de Segura

First prize in the competition for the new Medicine School. Universidad de Sevilla